Posted on September 18, 2014 by NutsforNutrition

I flew to Seattle a week before the wedding and got to spend a few days getting in some father daughter time.  I even got my dad to help decorate the mason jar jugs and bags for everyone for the party!

2 of my bridesmaids landed on Wednesday, Laura and Stephanie.  Laura and I used to work together when we were stationed in California in the Air Force.  Stephanie is my maid of honor’s cousin who I also met while living in California.  It was nice to spend some quality time with them.  We all stayed at my dad’s that night and had my step mom’s famous pot roast feast, with some margaritas of course!

My dad dropped us off at our hotel downtown the next day and waited for all the other girls to get in.  Amanda, my maid of honor and Kelly drove up from Sacramento early that morning the rest of the girls flew in from London, Vegas, and Texas.  We all walked to the local Whole Foods to pick up snacks and dinner and spent the rest of the night hanging out and catching up.  It had been a few years since I last saw some of the girls so it was so fun just hanging out doing nothing!

1 of many elevator selfies!

The next morning, we had a walking food tour of Pike Place Market on the agenda.  Our tour guide was so fun and funny!

All the food places we stopped at were awesome and we didn’t have to wait in any lines.   We had some of my favorite fresh cinnamon sugar doughnuts

smoked salmon, seafood chowder that was the best I’ve ever had, Oprah’s favorite mac & cheese at Beecher’s, chocolate covered cherries & pecans, and lastly crab cakes that were to die for from Etta’s, a Tom Douglas restaurant who also did the catering for our wedding!

A fish stand in the market is famous for watching fish throwing, and I kindly got volun-told that I had to catch a fish! I caught it, so at least I didn’t make a fool of myself.

After the food tour, we all headed back to the hotel to chill out.  My mom landed around the same time so I took a walk to her hotel so I could see her since I hadn’t seen her since last May.

Once I got back to the hotel, we all started getting ready for the night.  The girls decorated our hotel room and got the drinks and games in order!

We went out for sushi for dinner

and our next stop was a place called Key on Main- a dueling piano bar.  Has anyone ever been to one of these places before?!

It was a lot of fun! The pianists can basically play and sing any song which was pretty cool, and they had a bunch of gear to add beats and extra music in.  Basically someone pays to request a song for them to play, the more the pay, the quicker it will get played, and if you want them to stop whatever song they are playing you have to pay a dollar more than what the person paid to request it.

There was another bachelorette party going on, and the poor girl got called on stage and had a very inappropriate song sung about her, so I knew it was only a matter of time till it was my turn!  I was in the bathroom a little bit later on, and I heard them calling my name to come on stage, I had to pee and had no intentions of rushing back out there! When I walked back out, they caught me and I had to get on stage for my roasting, it was hilariously inappropriate!

We stayed there for another hour or so, and I realized one of my favorite old school burger joints were right around the corner.  My dad used to go there when he was a teenager, it’s a old school little place, cash only and no special orders! Cheeseburgers were needed!

Amanda and Kelly had stopped at Voodoo Doughnuts in Portland on their way to Seattle and I had a nice surprise waiting for me when we got back, and it was creme filled and delicious! 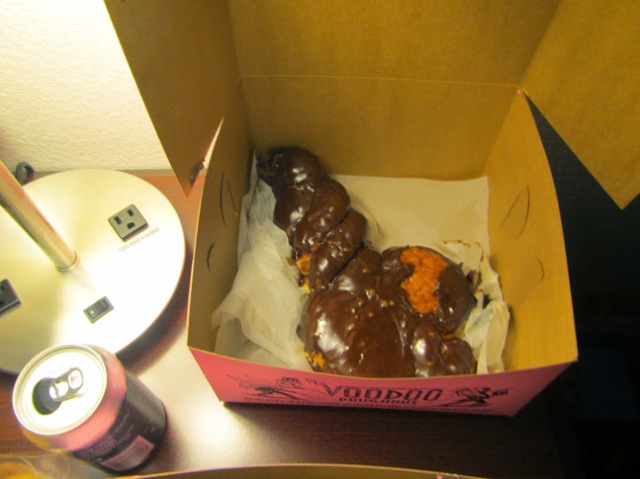 We had an awesome night, and I was glad it wasn’t a very late one since we had all day festivities planned the next day.  Mason jar decorating at my aunt’s followed by my bridal shower, and then out for my little brother’s birthday.

It was so great to have such a great time with all my family and close friends from different points in my life.  I was so happy we all could get together and have so much fun, I’ll cherish those memories forever!